Songs for dogs may hit the U.S.

“Global release in now imminent for a New Zealand song pitched for dogs and completely inaudible to humans. ‘A Very Silent Night’ is said to have been recorded at such a high sound frequency that only dogs can hear it, The Daily Telegraph reported Sunday.”

“Dogs are great life coaches and do especially well on holidays. Problems with keeping your New Year’s resolution of more exercise, meeting people, savoring the moment, more love in your life, etc., are easily solved by a trip to the pound. Dogs are good diet advisors too; basically if they like it then it’s probably bad for you.”

“Diane Dameron made a phone call Friday that ended up reuniting a 12-year-old boy with his two miniature Schnauzers. “It made me cry,” said Dameron, a secretary at the Jackson-Madison County Humane Society. Since the Feb. 5 tornado, Dameron said that the society has fielded about 25 calls from people reporting lost pets. One of those calls came from Mary Frost. She reported that her 12-year-old son’s two miniature Schnauzers, Max and Buddy, went missing from their yard just before the storm.”

Beautiful Models, Hairy Legs and All

“NOW that Uno, the 15-inch beagle, has captured the crown, becoming the first of his breed to win best in show at the Westminster Kennel Club dog show, and now that more than 2,600 other canine competitors have been leashed and crated and hauled home to familiar kennels and sofas, it seems fitting to consider an overlooked aspect of this crowd-pleasing sport: the strange collision of fashion and dog shows.”

The Aussie who won the herding group at Westminster

“To the dog lovers and judges who packed Madison Square Garden this week for the 132nd annual Westminster Kennel Club Dog Show, she was Ch Vinelake Collinswood Yablon OA OAJ. Terri K. Collins and those who go to Collinswood K-9 Services at 81 West St., Auburn, MA, however, know her as Deuce. Deuce won the herding group competition of the Westminster show Monday night that featured 35 Australian shepherds, and 290 dogs in that group.” “A pair of controversial bills that would place additional requirements on dog breeders drew a large crowd Monday before the Legislature’s Committee on Agriculture, Conservation and Forestry. Dog breeders were united in their support for the bills’ intent — safe, ethical breeding standards — but united in their opposition of the details on how to get there.” 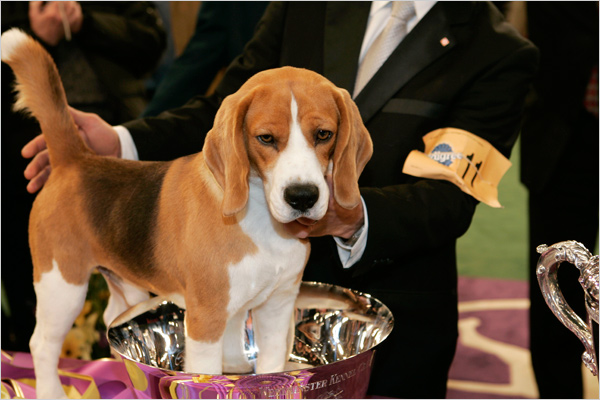 “When Dr. J. Donald Jones, the judge for the best in show at the Westminster Kennel Club Dog Show Tuesday night, looked at the seven competitors for the title, he saw four breeds that had been denied the crown and three that had worn it.

Of course, there is no actual crown, but a lovely celebratory bowl that victorious toy dogs leap into for a little nap while their entourage kvells. The four breeds that had been shut out were the beagle, the Weimaraner, the Australian shepherd and the Akita. There were two breeds that had captured best in show four times, the standard poodle and the Sealyham terrier, and a third, the toy poodle, that was twice a victor.”

“Uno the beagle turned Madison Square Garden into his own big, green backyard. He barked and bayed. He nipped at a newly printed sign. He tried to grab his leash. He took a flying leap at a piece of filet mignon. “Snoopy would be proud,” handler Aaron Wilkerson said Monday. “He was being his merry little hound self.” He also did something out of character: He became the first beagle to win the hound group at the Westminster Kennel Club show since 1939 — that’s 483 years, in dog years.”
Associated Press