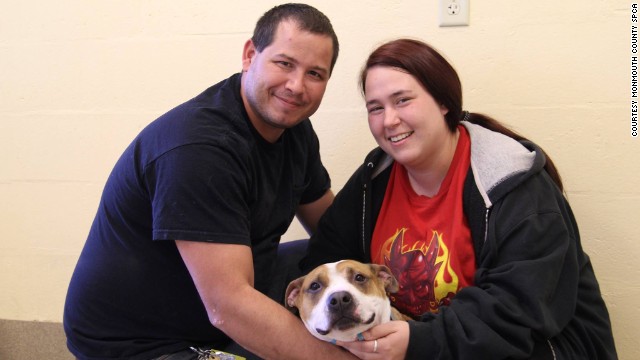 CNN — When Chuck and Elicia James ventured to their local animal shelter to adopt a dog, they expected to meet a new member of their family. Instead they found themselves reunited with their long lost canine.

The James’ had not seen Reckless, a brown and white terrier-pitbull mix, since he went missing over a year and a half ago during Superstorm Sandy. They had lost their beloved pup after the fence in their Keansburg, New Jersey, home was mangled during the storm, Chuck James told CNN on Friday.

Apps go to the dogsFamily finds dog amid landslide rubbleCancer patient reunites with lost dogWhile the family never stopped looking for Reckless, for their 10-year-old daughter’s birthday they decided it was time to move on and adopt a new dog at the Monmouth County SPCA.

Not to brag, but we may have a little genius on our hands. Our 6-month-old is up before dawn playing brain games. She knows her way around an iPad and practically devours puzzles, and I’m teaching her to read. Just recently, she mastered an advanced chess toy.

I am talking, of course, about our dog.

He exited the glass double doors and walked away from the building.

Inside, his fellow Pittsburgh police officers lined the hallways of the veterinary office, some in their uniforms, others sporting green canine unit sweatshirts, as he was.

They had just lost one of their own — and Officer Lerza had lost his partner.

A Pittsburgh police dog stabbed earlier this week is resting and showing signs of improvement this morning, a police spokeswoman said.Rocco, an 8-year-old German Shepard, remains in critical condition but is stable and his blood count is improving, spokeswoman Diane Richard said in a press release.The dog was injured Tuesday night while helping Pittsburgh police capture a fugitive, 21-year-old John Rush of Stowe, who police said was found lurking in the basement of a building in the 3700 block of Butler Street in Lawrenceville.

Police said Mr. Rush — also accused of resisting Allegheny County sheriff’s deputies’ attempts to arrest him earlier that night on numerous warrants — swung “wildly” at officers with a pocket knife and stabbed the dog and an officer, and injured two others officers in the scuffle.Rocco had two surgeries and multiple blood transfusions Wednesday.

When their mixed-breed dog Kanga escaped from a kennel in November 2012, about ten miles from their home, the Koprowski family spent months searching for her.

The northwest-side family searched neighborhoods, checked in with local kennels and scoured lost-dog postings on Craigslist. All to no avail.

They hoped for the best, that a kind family had taken her in, but knew that after being lost in the desert for so long the odds were against her.

But it wouldn’t be the first time Kanga beat the odds.

It has been almost 10 years since Bashur the dog left a war zone in Iraq for a quiet home in the Chicago suburbs, and in that time, a lot has changed.

Once small enough to fit in the palm of the Army officer who rescued her from a life in the wild, she has grown to a 110-pound hulk. Once attuned to the faint noise of distant but rapidly approaching rockets, her radar now locks onto deer and foxes.

But one thing is still the same. Bashur remains a paragon of faithfulness — only now, the center of her world is the officer’s father, Hampshire car dealer John Fenzel.

“She’s a character,” Fenzel said the other day. “Not a lovey-dovey lap dog, but super loyal.”

Watching them poop, researchers discover that dogs can sense which way is north

The next time you’re lost in the wilderness, trying to figure out which way is north, forget about moss growing on the side of a tree. Just pay attention to how your dog poops. He’s a regular canine crap compass.

Okay, that is a vast oversimplification of two years’ worth of study by a group of German and Czech researchers, but it illustrates how much we’re still learning about the mysteries of man’s best friend. It turns out that when he squats to defecate, your dog may be communing with the unseen lines of magnetism that girdle our planet.

That, at least, is the gist of an article published late last year in the journal Frontiers in Zoology titled, “Dogs are sensitive to small variations of the Earth’s magnetic field.”

Read more: Watching them poop, researchers discover that dogs can sense which way is north – The Washington Post.

Calls and emails have been coming into the Fox 2 newsroom about a dog rescued from a deadly chain reaction crash in Indiana. Sadly, his owner is one of three people who died. A local man is working to find the dog a home. (He says no more calls are needed. Enough people have expressed interest in adopting Sparkie.)

Click on the video player to watch Robin Schwartz’s report.

There was wreckage as far as the eye could see Thursday on I-94 near Michigan City, Indiana. 46 cars, SUVs and semis collided during a sudden white out. Bob Sharpe of White Lake was in the pile up that killed a man from Chicago and a couple from Grand Rapids and left more than two dozen others injured. We spoke to Bob by phone.

"The accident scene was massive carnage," he told Fox 2. "I was the lucky one. I came to a stop behind a bunch of vehicles that were crashing in front of me, vehicles were passing me and crashing behind me and I didn’t get touched."

Loyal dog, stayed with deceased owner in woods for more than a day, needs home 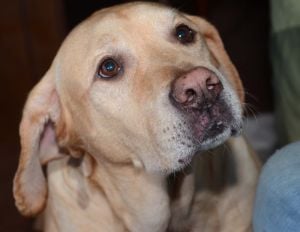 Lancaster PA — Chase apparently stayed in the woods for more than a day, barking to draw attention to his owner, who lay dead in the snow.

Now, the family of Claudine Louise Murphy, a Brecknock Township woman who likely died of hypothermia sometime Saturday, is trying to find a good home for the devoted pooch.

“Chase was not on a leash, he was just walking beside her,” said Nancy Althouse, who lives nearby and who first rescued Chase, a mixed yellow Labrador retriever, from a bad living situation some nine years ago.

“She rescued him, and then he tried to rescue her. And now he is without a home.” 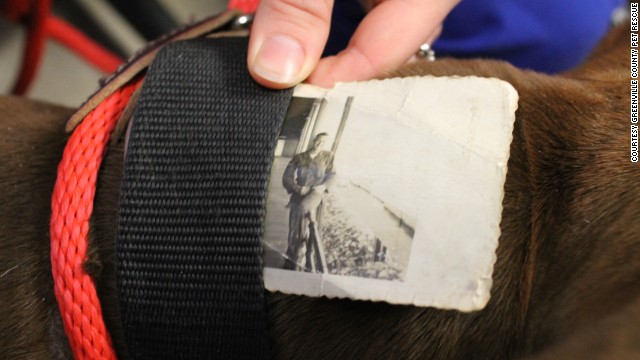 (CNN) — When animal control officers were called to a Greenville, South Carolina, neighborhood to pick up a wandering pit bull on a cold Monday in December, they didn’t expect a mystery to unfold.

But inside a fold of the dog’s collar, they found a wrinkled black-and-white photo. It had no name or date. A smiling man seated on a railing looks straight into the camera — but, beyond that, the photo offers no clues.

The friendly tan canine, now named Soldier because the man in the photo may be wearing a military uniform, was skinny but well-behaved, said Susan Bufano, community relations coordinator with Greenville County Animal Care. He was not neutered or microchipped.